5 Ways To Master Your Networking 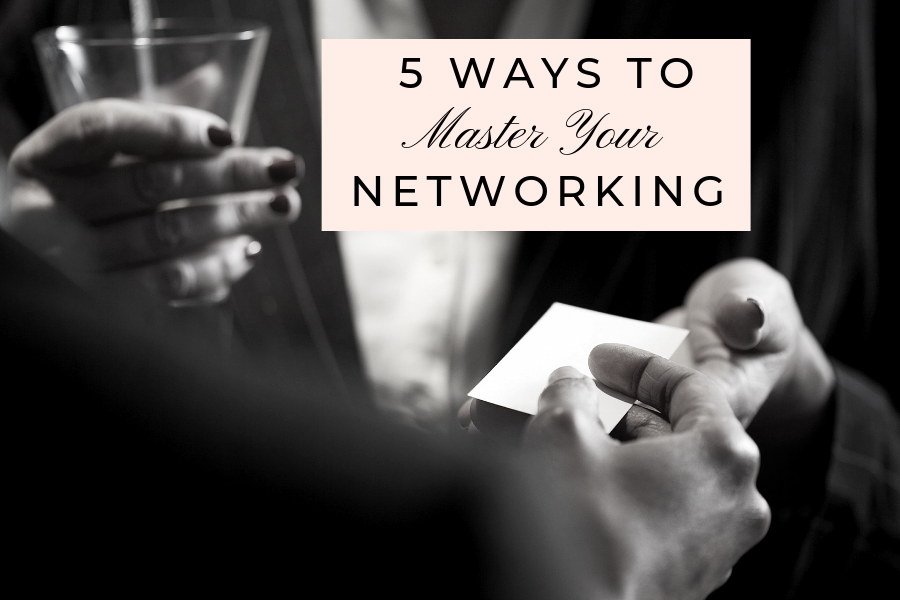 I’m heading to Calgary today to talk to a group of women on networking.

I decided to take a different approach than giving the standard spiel on, “make sure to be a card collector vs. a card giver”, “have your elevator pitch ready” and “know your follow up sequence” blah, blah.

You’ve heard it a million times.

You know how to network.

But I want to sing a different song to my group of 40 or so professional women today at lunch.

I thought this would be beneficial to you (my loyal blog readers) as well, because most of my tribe have something going on in the realm of business, and by golly – there has got to be a better way to network that to show up to a million meetings with substandard hotel coffee and stale doughnuts.

PLUS – THIS IS ALL ABOUT MAKING MONEY BABY!

Here is my take on networking.

Once upon a time, an alpha-male (I’d use another name, but I’ll be polite) who was a “sales-guru” hired by my brokerage, stood in front of a room of “sales-people” and made us memorize that “our network = our net worth”.

He went on to say that if you want to kill it in sales, then you “MUST HAVE” a pretty big network.

Okay, so that wasn’t the first time I’ve ever heard that, but I took it to heart.

UNTIL, I realized I had a vagina and that I’ve NEVER been successful TRYING my whole career to do things the way a MAN does. Seriously.

(Not to bash men, I adore and look up to most of them, but somehow the alpha-males just get into my head and marinate there!)

But, before heading down the rabbit hole and telling you how I FAILED miserably in business until I started following my own way of doing things (like relating financial concepts to shoes as I do in my book, Strut), there was a greater truth that was revealed to me.

A few years later, last summer to be exact, there was this MASSIVE A-HA moment when I looked at a few VERY successful people around me and they actually had, like, NO NETWORK or basically just knew a few people in the business world. They kept to themselves, and you’d barely know they existed.

To take it a step further, they actually massively disliked humans – you know, for the most part – they never wanted to be around people AND YET, (here’s the KICKER IN THE FACE!) – they were worth millions and making a ton of money, if not millions a year.

This naturally confused me.

I mean, if I followed the belief that my network = my networth, then I would be one of the richest people in the world. I adore people, LOVE the humans, and because of it, I do have a huge network.

This belief of mine would also make most women the richest in the world, as we are queens of the socializing, but we all know this isn’t the case.

The “sales-guru” guy hired by my brokerage to tell me that the size of my network = my net worth was TOTALLY WRONG.

The 2 aren’t at all correlated.

That day my life changed.

I changed my belief from “my network = my net worth” TO “I could make money literally sitting at home all day”. (Not that I do, but you get my point.)

I just needed to find one or 2 amazing people to work with, or people whose zone of genius was “connecting” or hit up my exact ideal clients one on one and go for a coffee, once a week – not 500 times a week. (I have every coffee rewards card in the City of Calgary!)

I stopped chasing NETWORKING events. I stopped even looking for speaking gigs or anything.

Yes, I still LOVE speaking, and will do it because I love it, but I’m no longer doing it for the reason to network, I’m doing it to hone my skill as a speaker, so my message can reach more people.

Oh, and I LOVE HUMANS so much. So, that’s not changing.

Here’s the beautiful thing I’ve preached on this blog a hundred times: fall IN LOVE with changing, challenging and creating new beliefs.

Every time you change your beliefs, expand them or get rid of old ones, you up-level your life.

Networking Tip #1: Your Network DOESN’T Equal Your NET WORTH!

Networking Tip #2: The Person With The Most Clarity Wins

Do you really know what you want?

(Cause if you don’t know you will be sucked into someone else’s “WHY” and “WANTS”!)

Why did you just show up at this networking event?

Did you walk in with a goal? Was it to build fabulous connections with 2 new people?

Hey, this goes for sales too.

Oh, and anything you want in life, including sex.

You have to know what you want.

The person with the most clarity wins because clarity breeds confidence and courage.

Most people really don’t know what they want in the grand scheme of things.

Which leads naturally into…

Networking Tip #3: Time Is Your Most Valuable Resource

Before you sign up for your next “networking” meeting, make sure you really calculate the cost of it.

Time, usually being the biggest cost, is often wasted when you are a “people pleaser” like me. Naturally wanting to please everyone, I say YES way more than I should.

Everyone can tell if you have a canned Elevator Speech.

I’m FULLY against them.

I don’t even have one.

My belief here, (and you don’t have to believe what I say) is that LAW OF ATTRACTION will win EVERY TIME, meaning, if you say “UM” or screw up your elevator pitch by stumbling over a few words, trust me – it won’t matter.

Your vibe, genuine or not, salesy or not, heart-felt or not, will SHINE through.

People can see into your S-O-U-L!

So, don’t sweat the fact that you don’t know what to say or that your 30-second pitch isn’t great.

I change mine all the time. You’re probably like me.

Mutli-passionate and where to begin?! Do I start by saying I’m a writer, blogger, author? Or do I lead with my 20-years experience as a CFP, have created over 5 online courses or do I lead with the fact I’m a mom, or do I say I’m going to take over the world?!

Difficult to fit all that into a 30-second pitch.

This goes back to the ‘time’ thing, but you need to pick and choose where you are going to get your best bang for your buck!

Maybe hotel networking events aren’t for you, maybe you are better off choosing specific volunteering gigs where you can better meet the people you need to connect to.

Or maybe you host your own lunch n’ learns or host wine n’ cheese events for prospective clients.

The thing is this.

Pick and choose wisely the events that will naturally feed your business.

I do. I love getting to know people on a deep level.

That stuff FILLS ME UP!

If you do a ton of networking events, you obviously know you need to cultivate relationships. That’s what this whole thing is anyways.

That’s all marketing is.

Sharing your message with people.

So, do you have a plan for that?

Do you have a plan for cultivating relationships in a way that doesn’t feel yucky or salesy to you?

Do you have a plan for cultivating relationships that doesn’t leave you feeling drained by the end of the day?

Do you have a plan to take over the world (aka. take your business to the next level?!)

PS. If you FEEL THE NEED to start taking your MONEY & WEALTH seriously, then you need to start at the foundation and start with the Wealth Spa™ Money Method!

Tidy up that FINANCIAL DISASTER you call your life and step into some serious financial bliss.

The Power of “AND”